Warning: A non-numeric value encountered in /home/smokeyb4/public_html/wp-content/themes/Builder-Foundation/lib/builder-core/lib/layout-engine/modules/class-layout-module.php on line 499

The club ultimately evolved into a nationwide organization with hundreds of members who regularly buy, sell, and trade with each other which would never have been possible without the formation of the SBA. 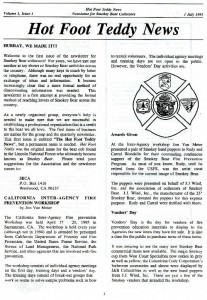 Debuting on July 1, 1995, the first issue of the Hot Foot Teddy Collectors Association newsletter was an attempt at providing “a formal method of reaching lovers of Smokey Bear across the country.” 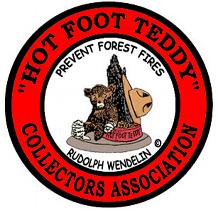 The Hot Foot Teddy Collectors Association logo, a bear cub with bandaged paws sitting beside a charred tree stump, was unveiled in 1997. This was drawn by the late member-artist Rudolph Wendelin, “caretaker” of Smokey Bear. That same year, the club hosted its first national convention, attracting over 80 members.

On August 16, 2012 by a majority vote of the membership, the name of the Association was changed to the Smokey Bear Association.

These members have attended every convention from 1997 to 2018.

The below named have missed only one convention:

Contact Jack Winchell if you have anything you want to buy, swap, or sell.

How do I request a Smokey Bear appearance?

1. Call your closest U.S. Forest Service Office, here's a link to map of all the offices across the country:

2. Call your nearest State Forest Service Office. Go to this website, click on your State, then find the District office closest to you:

3. Contact your local Fire Department, they often have their own Smokey Bear costumes and make Smokey appearances.

Where in the World is Smokey Bear?
Photos of Smokey Bear all over the world

My travels with Smokey Bear 2012